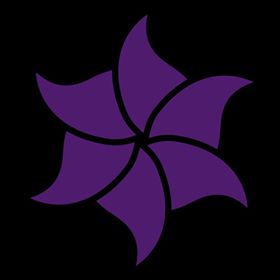 This is the purple flower of Orikrindia, the nation emblem. Its six petals represent the six provinces of Orikrindia.

Here are a few more pronouns in Ori (non-personal pronons). The base forms of these words is the indeterminate pronouns (something, somewhere, etc.), while adding na- makes the words interrogative (who?, what, etc.). Similarly, adding ca- makes them negative (no one, no way, etc.). See below for the forms and some examples sentences.

tin ‘in some way’

Nanye minim ti-trentepya ma? ‘Where can I find the temple?’

Nasya tranye ti ma? ‘Why are you here?’

Ori has two sets of deictic adjectives. These are adjectives that modify nominals to show relative spatial position–in English we have ‘this’, ‘that’, ‘these’, ‘those’. In Ori, one set of adjectives relates to spaces near and away from the 1st person (the speaker), while the other set is used with references to all other persons (2nd and 3rd).

Plural vs singular is the only morphological distinction, and there is no class agreement on deictic adjectives.

tim porisa ‘those sheep’ (far from me)

tram porisa ‘these sheep’ (near me)

Ori has a few irregular verbs, like all natural languages. Many of them are quite common verbs.

Examples of conjugations of irregular verbs (where two forms are listed under 3rd person, the first form is for animate/inanimate nouns and the second is for celestial/abstract nouns):

More irregular verbs and other stuff to come!