It is traditionally made up of the eastern half of the Quarios continent in Keta, the other half consisting of the country of Lomilin. Gotevians are Amel people (like the Lomi and most inhabitants of Keta). Below is a reference map to show where Quarios is. The “right” half from this perspective is the historical land of the Gotevians. 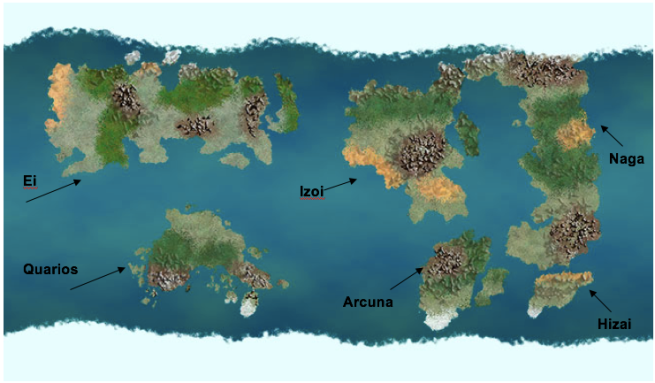 Queen Inacaporia was the Gotevian monarch who merged Gotêvi with its neighbor, Lomilin, into the new nation known as Quarios (same name as the continent). The creation of the state of the Quarios also meant that the various lands in Ei under the control of both Gotêvi and Lomilin then came under one rule–and in this way, Quarios had control over most of the land in Keta.

Gotevian government has been a constitutional monarchy for over 1300 years as of 600 E.K. (eimoina koa reckoning of Gotêvi). Prior to this, there had been an absolute monarchy until the satmyna revolt, in which the populace demanded that a constitution be instated to guide the laws of the royalty. After this, the hierarchy that existed beneath the sovereign was drastically altered. Whereas before there had been several governors overseeing massive areas of land, after the revolt many smaller individual territorial supervisors were instated in order to give more specific attention to each region. This allows specialized rule for areas that have different needs; the region of tjenan, for example, has had a long history of droughts—since this is an agricultural province, the overseers of tjenan can specialize in drought relief.

In recent centuries, Gotevians have typically harbored a deep-rooted affection and loyalty for their current ruler. That is, unless he or she makes empty promises. Then, as history has shown, they are not known to be willing to forgive or forget such trespasses. King Deleng defied the constitution in the year 422 E.K. by showing favoritism toward one of his councilors in allowing him to give unwarranted power to certain governors, who in turn abused their privileges and ruled tyrannically over their local people. Four years later, Deleng was ousted by the rest of his royal council, and his younger brother took up the throne.

Until recently, females took priority even before first-born males. This law was changed in 456 E.K. to allow the eldest child rights to the throne regardless of gender.

The government is very supportive of its populace, providing aid for them in crises such as natural disasters like droughts, famines, and floods. It also pays for 15% of the education for any child until the age of fifteen. Taxes, however, tend to be rather high, and Gotevians are known for their vehement dislike for them, though they reserve a special loathing for local and property taxes.

Gotêvi in recent centuries has not been predominantly religious, but the old faiths still exist and are in no danger of dying out. Some of the major living religions include:

Delostism (delostinadh) (/dɛlostinað/): Delostism is based around the worship of a single goddess, Delost, who represents serenity and peace. Prayers are offered through meditation, traditionally lasting thirty minutes a day. The spiritual goal of Delostism might be said to be total clarity and peace of mind. The religion is strictly anti-violence. Delost is sometimes referred to as Milnjameli ‘the sister-mother-daughter’ (il- from iljuma ‘daughter’, -njam- from njama ‘mother’, and -eli- from eliar ‘sister’).

Zirkism (zirkonadh) (/zirkonað/): Zirkism is perhaps the oldest organized religion commonly practiced by the Gotevians, originating thousands of years ago with the Ankesimtoh people, the ancestors of both the Gotevians and the Lomi. Zirko represents the largest of the two moons of Aeniith. Zirko has a humanoid figure that represents everything that encompasses the female. Aliotir is the mate of Zirko, representing the sun. Their children are the stars and comets, known as the kwidae.

Animism (zenitadh) (/zɛnitað/): Probably the oldest set of spiritual beliefs, dating back also to the Ankesimtoh people. It is not so much a religion, as it has no dogma and no doctrine. It is comprised of the belief that everything in existence has some latent sort of sentience—in effect, everything possesses zenit, or spiritual awareness. Gotevian animism also places a great gravity on the meanings of dream experiences. It is believed that one lives two lives: one in the waking world and one in the dream world. These two selves are a part of each other but one must work in order to gain a purposed connection and establish communication between the two selves, as it is thought that each self is different in that is can perceive and understand different things in reality, which the other cannot be aware of. Thus it is considered that a form of wisdom emerges from drawing on both the skills of the dream self and the waking self.

There are several ethical and aesthetic values that influence a lot of Gotevian culture and art. A few of these are the following:

Truth: There is a fundamental Gotevian belief that truth is something that must be found whenever possible. Lying and covering up the nature of reality is considered disingenuous at best and malignant at worst. Search for the truth is also the motive for the Gotevian practice of introspection: to know oneself is considered the beginning of knowing the world. As such, lying (especially in relation to oneself), is considered horna, or an ethical crime.

Symmetry: Symmetry is related to order in Gotevian thought, which is in turn related to harmony (see below). Much of traditional Gotevian art sought out the symmetry in nature and reproduced that balance. Balance is considered the beginning of stability, which is considered necessary for health and peace of mind. Symmetry is also related to equality—equality is believed to foster harmony.

Harmony: It is very important that the world work smoothly to the Gotevians. Harmony is thought to be necessary to true happiness and peace. But in practice, Gotevians are not willing to sacrifice truth for the sake of harmony. Thus, a harmony that wears the mask of serenity instead of being true serenity is no harmony at all, but rather it is a lie, and thus must be changed.

Serenity: Serenity is highly valued, both physically and abstractly. Mental serenity is believed to give longevity. Physical serenity in the world at large is believed to foster introspection and reflection, thus leading the way to truth. The strong belief in serenity may have influenced some of the military decisions made in the history of Gotêvi and its people.

Prosperity: Prosperity is considered the result of harmony combined with irrkima ‘the vital fire’, what might be described as chaos, ambition, desire, or change. Things like these are considered a necessary additive for anything to “happen” in life, or for any positive change to come about. It is considered necessary for material and spiritual prosperity, which is described by the Gotevians as a kind of chaotic power that has finally fallen into a working pattern.

Gotevian culture has many forms of art. The arts are arranged in a hierarchy in the Gotevian cultural consciousness, some being considered more “advanced” or developed than others.

Theatre in Gotevian culture has always had symbolic meaning; often plays make allusions to mythology, ethics, religion, society, or psychology. It is different from other arts in that there is very little realism involved. Actors wear long colored robes symbolizing their roles and intentions. The language is also very metaphoric, subtle, and complex. Sometimes plays can last for up to five hours.

In visual arts, sculpture is considered the most advanced form, because it is closest to the reality of what the artist is trying to represent. A lot of value is placed on realism in Gotevian visual art, so the closest representation of reality is often considered the highest level of skill.

Language arts are considered probably the highest of all. They are definitely thought of as the most cerebrally demanding form of art. Poetry, wordplay, literature, and riddles are all grouped together because they are strictly conceptual arts, having no physical form. Thus they are thought of as slightly mysterious and very powerful.

Traditional Gotevian music is based around a 19-tone system. Scales are comprised of 5–8 of these tones and are woven into melodic lines that are largely pentatonic in nature. Harmonies are valued very highly, and complex chords are quite common. Instruments tend to be either woodwind or string. Rhythmic complexity is usually downplayed, and there is little use of percussion. On the islands south of Gotevi, the Teg people have a different scale that is diatonic. In Teg music, there is much more heavy percussion.

Gotevian house designs depend on whether they are located in an urban or rural area. Urban houses tend to be very vertical, because of space issues. Wood and brick are the most common materials to use. One high quality wood that is very desirable is plurra, which is similar to an oak tree. Gotevians also began importing plirrass wood (called plirrad in Gotevian) from the Quiluma Bae around 450 E.K. The wood is famous for its pale luminescent glow when seen in the light. It also light but very strong, so it is an ideal building material.

In the countryside, houses are more round, compact, and the walls are thicker. Many people living alone or with one other person live in a rectangular house with one room called a meknin. mekninae usually have one door at each short end of the rectangle, a hearth, a mat-covered sleeping area (on the floor), a small table for eating, and various shelves and cupboards. These houses are usually just outside city limits, but not quite in the heart of the rural areas. The main problem with these houses is their relative low security—they often have weak locks because of the thin walls of the meknin, so it is easier for potential thieves to break in.

In architecture, symmetry is, as in other forms of art, highly valued. This can be seen in the facades of higher class homes, and the minor decorations of simpler houses. Decorative designs are often organic, rather than geometrical. Subtlety is valued over flashiness, as it is considered a sign of a sophisticated mind to appreciate subtlety of form. For houses that are painted, common colors are earth tones such as brown, tan, green, deep orange, and beige. In the cities, jewel tones are popular, as well as plain white, for it considered a sign of cleanliness and fineness to be able to keep a clear white surface free of dust and dirt in the relatively arid climates of most Gotevian territories.